Roderick Alexander Chisholm was born at Lower South River, Antigonish County, the son of Alexander D. and Janet (Chisholm) Chisholm. Alexander D. was a descendant of the Chisholm family known locally as “The Soldiers.” His father was Roderick (Rory the Soldier), while his grandfather was Alexander (Alex the Soldier), who at one point served in the British Army. According to an article in the August 3, 1944, edition of The Casket, Alex (Soldier) Chisholm immigrated to Nova Scotia aboard the ship Aurora in 1803. Also on the vessel were his father Donald, mother Elizabeth MacDonald, and brother Donald (Og). At some point, the family moved from Lower South River to Meadow Green.

Roderick’s mother, Janet, was the daughter of James (Jim Colin Donn) and Margaret (MacIntosh) Chisholm. James was the youngest son of Colin (Donn) Chisholm, pioneer settler at Marydale, near St. Andrews. Colin (Donn) was the son of Alexander (Breac) and grandson of Alexander Chisholm, Glen Affric, Scotland. The latter was one of seven clansmen who sheltered “Bonnie Prince Charlie” in a cave at Glenmoriston until he could safely board a ship and return to France after the failed 1745 Scottish uprising. Two of the other clansmen were brothers to Alexander.

Roderick Alexander was working as a stationary engineer at Vancouver, BC, when he was drafted under the Military Service Act (1917). Upon reporting for his medical examination on December 4, 1917, he was declared fit for military service. At the time of his enlistment, he was five feet 11 inches tall, with blue eyes and black hair.

Roderick reported for duty on February 25, 1918 and departed from Halifax aboard SS Ajana on April 15. Upon landing at Liverpool, England, 12 days later, he was transferred to the 1st Reserve Battalion, Seaforth, England. Reserve battalions contained men from the same military district where recruits or draftees enlisted, the 1st being a British Columbia reserve unit.

Throughout the summer of 1918, Roderick trained at Seaforth. On September 13, he was assigned to the 7th Battalion and proceeded across the English Channel to the Canadian Base Depot, Le Havre, France, on the following day. While he was “taken on strength” by the 7th upon landing on the continent, Roderick was re-assigned to the 16th Battalion (Canadian Scottish) on September 20 and immediately joined his new unit in the field.

One of the Canadian Corps’ most experienced units, the 16th was established at Camp Valcartier. QC, in September 1914, its initial personnel drawn from four Canadian Highland militia units. The battalion crossed the English Channel to France in early 1915 as part of the 1st Division’s 3rd Brigade, where it served alongside three other Highland units—the 13th (Royal Highlanders of Canada, Montreal, QC), 14th (Royal Montreal Regiment), and 15th (48th Highlanders of Canada).

During the evening of September 25, 1918, the 16th Battalion entered the front trenches along the western side of Canal du Nord, the village of Sains-lès-Marquion on the canal’s eastern side opposite its position. While other sections of the structure were incomplete, the portion in front of the 16th was complete and filled with water. The British 11th Division to its left also faced a wet canal, surrounded by marshland on both sides.

To the 16th’s right, the 4th and 14th Battalions—two other 1st Division units—stared at a dry, unfinished section of the canal. In the early hours of September 27, the 14th advanced crossed the canal, with the 13th following in close proximity. Once the two units had successfully established a beach-head, the 15th Battalion passed through the 16th, which was stationed in reserve, and upon crossing the canal swung to the left, in an effort to connect with the 11th British Division. At 2:00 p.m., the 16th’s soldiers made their way across the canal and advanced in the direction of Haynecourt.

The following day, the 16th’s personnel occupied positions along the canal’s eastern side. The battalion subsequently marched to Haynecourt as the Canadian Corps “leap-frogged” its units through one another, in an effort to maintain the advance’s momentum. The 16th’s soldiers, however, were not directly involved in the first several days’ fighting.

By September 30, the unit was located in shell holes along the Douai-Cambrai road, preparing for an attack scheduled for the following day. The 3rd Brigade’s objective was a cluster of villages beyond the road. The 13th Battalion received orders to attack Sancourt and move on to Blécourt. Once secured, the 14th and 16th Battalions were to advance, the 14th veering to the left toward Bantingy while the 16th advanced on Cuvillers.

At “Zero Hour”—5:00 a.m. October 1—the 13th advanced toward its objective, with the 14th and 16th following in its wake. The two units passed through the 13th’s line at Blécourt and continued the advance through Cuvillers and Bantigny respectively. The soldiers soon found themselves beyond the Canadian Corps’ line, their flanks exposed on both sides. To make matters worse, the battalions lost contact with one other.

A subsequent German counterattack at Bantigny succeeded in penetrating behind the 16th’s location, forcing both units to withdraw to the villages they had captured earlier in the day. The 16th’s war diary reported five Officers and 19 “other ranks” (OR) killed in the day’s fighting, while eight Officers and 200 OR were wounded. Another four OR were wounded and missing, while 99 OR were unaccounted for.

Private Roderick Alexander Chisholm was last seen alive at the 5:00 a.m. “kick off” and was listed as “missing in action” at day’s end. He may have been included in the 99 “missing” OR. Before month’s end, his remains were located and Roderick was officially listed as “killed in action.” According to his “circumstances of casualty” card: “No details [were] available relative to the details of the actual circumstances of his death.” Roderick was laid to rest in Canadian Cemetery, Tilloy-lez-Cambrai, France, having served in the forward area for less than two weeks. 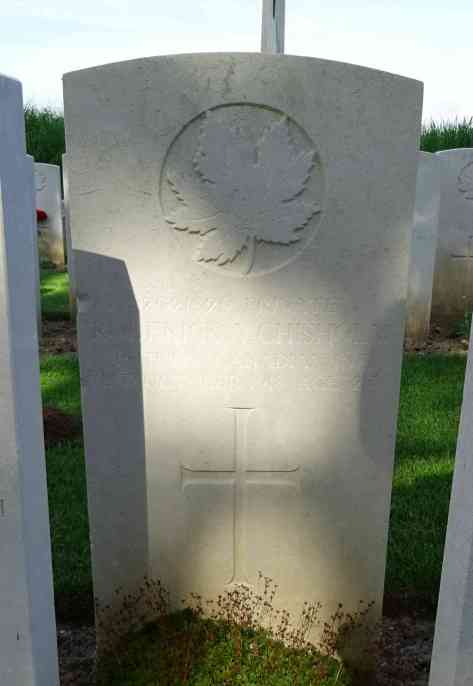 Private Ambrose Chisholm of Hallowell Grant Road, son of Colin R. and Marie Chisholm and a member of the 16th Battalion, was also killed in action during the October 1, 1918 attack. Ambrose was buried in Canadian Cemetery, near his Antigonish County comrade.