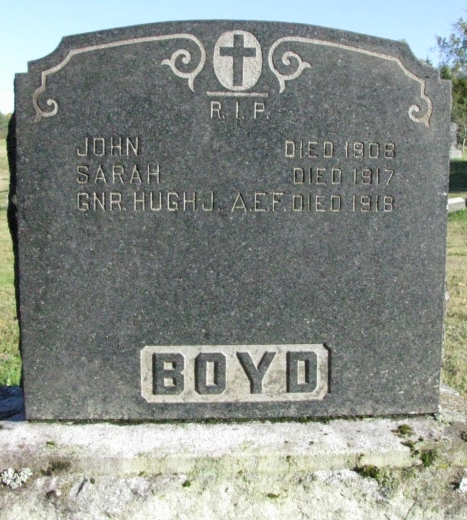 *Hugh John’s parents were deceased at the time of his enlistment.

Hugh John Boyd was born at “Boyd Settlement,” Fraser’s Mills, Antigonish County, the eighth of 13 children. His mother Ann, daughter of Alan and Janet (McIsaac) McDonald of Glen Road, Antigonish County, died at age 46 when Hugh John was only 11 years old, while his father, Angus J., passed away in 1909. The 1911 Canadian census lists Hugh John as the head of the Fraser’s Mills household. Living with him at that time were his brothers James Hugh, Joseph Angus and Daniel, and sisters Margaret and Marcella. Their maternal grandmother, Janet MacDonald, age 82, also resided with the Boyd siblings.

Hugh John Boyd was the great-great-grandson of John and Catherine (McPherson) Boyd, who emigrated from Scotland to Lakevale, Antigonish County, in 1801. His great-grandparents, Hugh “Pioneer” and Mary (McFarlane) Boyd, and Hugh’s brother, Angus, later settled at “Boyd’s Settlement,” which is now part of Fraser’s Mills, Antigonish County.

Hugh John’s father, Angus J., was a very respected member of the Fraser’s Mills community and a long-time teacher in several Antigonish County schools. He also operated a mercantile business at Fraser’s Mills and was the Postmaster of Boyd`s Post Office. Angus J. was a first cousin of John “Printer” Boyd, founder and operator of The Casket newspaper from 1852 until 1861. Another cousin, Angus Boyd, owned and operated the local newspaper from 1861 to 1890. To connect Hugh John Boyd to present-day Fraser’s Mills residents, he was also a first cousin of Hugh “Bell” Boyd, father of Archie Boyd, who currently lives on his family’s original “Boyd’s Settlement” property.

About 1915, Hugh John left the Boyd’s Settlement homestead and ventured all the way to Valdez City, Alaska, where he worked as a miner in the Midas Copper mine at nearby Solomon Gulch, along the port’s south shore. The mine was the fourth largest copper producer in the Prince William Sound area.

Several years after Hugh John’s arrival, however, the United States’ entrance into the war in early April 1917 impacted thousands of young men. A race against time ensued, as the American Army consisted of only 25,000 regulars at the time and thousands more were required to fight in France.

Following the American Congress’ approval of a compulsory military draft, Hugh John completed the required registration papers at Granby, Alaska, on August 14, 1917. At the time, he was working at the Midas Copper Mine, where he was employed by the Granby Construction Company as a “powderman.”

Based on information contained in a contemporary news item, Hugh John appears to have been “called up” in late September or early October 1918. Shortly afterward, he was sent to the National Army Training Camp at American Lake, near Tacoma, Washington State. The facility, later re-named Camp Lewis, was the first National Army cantonment for draftee training opened in the US during the First World War. The first recruits arrived there on September 5, 1917, and 37,000 officers, cadre, garrison and trainees were on post by year’s end.

Camp Lewis was the largest military camp in the country at that time. Many men from the western states were processed, equipped and trained there during its operation.
Hugh John Boyd was among the soldiers undergoing training in trench warfare at Camp Lewis in early autumn 1918. In mid-October, he fell ill and was admitted to the U.S. Army Base Hospital, where he died at 7:30 p.m. October 21, 1918. His death certificate identified the cause of death as broncho-pneumonia.

Hugh John’s obituary in the Antigonish Casket stated: “At Camp Lewis, Washington, on October 21 after a short illness of pneumonia, Gunner Hugh J. Boyd died. The deceased, who was the son of A. J. Boyd, Fraser’s Mills, Ant., enlisted in Alaska a few weeks previous. His remains, accompanied by his cousin, Pte. J. A. Boyd, were brought to his native home and buried in the family lot at South River Cemetery. Four sisters and three brothers, two overseas, survive to mourn their loss.”

Hugh John Boyd’s gravestone in South River Cemetery states that he died at Camp Lewis, Washington, USA, and was buried on November 18, 1918. The first cousin who accompanied his remains back to Nova Scotia was Private John A. Boyd, son of Angus and Mary (MacIsaac) Boyd, Fraser’s Mills, and a member of the American Expeditionary Force. John was working as a miner in Butte, Montana, at the time of the American declaration of war and was also conscripted into military service.