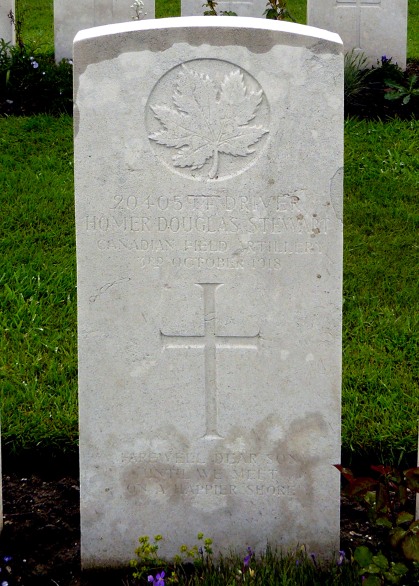 Homer Douglas Stewart was the fifth of eight children born to Adelia Pineo (Manson) and James Henry Stewart, 61 Pleasant St., Antigonish, NS. Adelia was the daughter of Alexander “Sandy” and Catherine (Cameron) Manson, Lochaber, and a descendant of a well-known Guysborough family. Sandy, who was born at Sherbrooke, was the grandson of Alexander Manson, a native of Wick, Caithness, Scotland, who immigrated to Nova Scotia around 1817 and initially settled at Stillwater.

Douglas’ father, James Henry “Jim,” was born at North Lochaber in 1863, the son of Alexander and Christy Stewart. Jim’s grandfather, Donald (Rob) Stewart, a native of Blair, Atholl, Scotland, immigrated to Nova Scotia around 1832 and settled near the head of Lochaber Lake. In 1883, Jim began gathering agricultural products from around the county for export to domestic markets. In the span of several years, he built a successful egg export operation, beginning in Newfoundland and expanding into the United States before the end of the decade.

When the United States imposed duties on imported eggs in 1890, Jim shifted his focus to the British market, where he once again built a prosperous business. After the turn of the century, emerging domestic markets gradually replaced foreign ones, although shortages following the outbreak of the First World War led to a resumption of the overseas trade. Jim’s successful egg-marketing operation earned him the local nickname “Jimmy Hen.”

In 1889, Jim built a large house at 61 Pleasant St., the present-day location of MacIsaac’s Funeral Home. On September 25, 1890, he married Adelia Pineo Manson in a ceremony held at Lochaber. The couple raised a family of nine children—eight sons and one daughter—during the years prior to the war.

Three of the Stewart boys enlisted for overseas service. Douglas’ older brothers, Clarence Berry and Elmore Harold, joined the 193rd Battalion in February and March 1916 respectively. Clarence was transferred to the 85th Battalion (Nova Scotia Highlanders) in late April 1917 and killed in action at Passchendaele, Belgium, on October 30, 1917.

Transferred to the 185th Battalion (Cape Breton Highlanders) in late December 1916, Elmore Stewart remained in England until March 1, 1918, at which time he was assigned to the Royal Canadian Regiment (RCR). The following day, he proceeded to France. Within days of his arrival at the front, Elmore was stuck in the face by artillery shrapnel. The wounds proved to be minor and he made a full recovery, rejoining the RCR’s ranks in late April 1918.

Approximately one year prior to Elmore’s arrival in France, Douglas followed his siblings into uniform, enlisting with the No. 1 Section Draft, Divisional Ammunition Column, at Sackville, NB, on March 14, 1917. Six weeks later, he departed from Halifax aboard SS Justicia and was “taken on strength” by the Canadian Reserve Artillery Brigade, Shorncliffe, upon landing in England.

After several months’ training with the 1st Reserve Artillery, Douglas was posted to the Canadian Artillery Reserve Pool as a “Driver” on November 2, 1917. Two days later, he crossed the English Channel to France, where he was assigned to the 3rd Canadian Division’s 10th Brigade, Canadian Field Artillery (CFA).

The 10th Brigade consisted of six field batteries—31st, 33rd, 38th, 39th, 40th and 45th—and two howitzer batteries—35th and 36th. As a “driver,” Douglas guided a horse-drawn wagon laden with artillery shells from “ammunition dumps” in the forward area to the Brigade’s various batteries. Needless to say, the task was a perilous one, as the dumps, transport routes, and gun placements were within range of German artillery fire.

With the exception of several days in hospital with influenza in early summer 1918, Douglas served in the forward area without incident for nine months. On the morning of August 8, 1918, the 10th Brigade’s batteries were in the line as Canadian Corps units participated in a major attack on German positions east of Amiens, France. The advance marked the beginning of a major Allied counter-offensive that eventually led to the November 11, 1918 Armistice.

Before month’s end, the 10th Brigade followed the 3rd Division northward to Arras, where its personnel participated in a second attack on the German line on August 27. In both instances—Amiens and Arras—the 10th Brigade’s war diary reported casualties among its personnel and horses, demonstrating the perilous nature of their role. Douglas, however, came through the battles—his first exposure to major combat—without injury.

There was no time for rest, as the 10th Brigade’s guns supported the Canadian Corps’ September 2 attack on the Drocourt – Quèant Line, a section of the Hindenburg defensive system east of Arras. While personnel remained in the line throughout the next two and a half weeks, there was a lull in the fighting as Allied units prepared for an attack on their next strategic objective—Canal du Nord, located on the outskirts of Cambrai.

On September 20, the 10th Brigade’s personnel withdrew from forward positions for several days’ rest. Six days later, the soldiers returned to the front line and prepared for the Canadian Corps’ impending assault on the canal. At 5:20 a.m. September 27—“Zero Hour” for attacking infantry units—“batteries began moving into positions about the old front line at Inchy, and were all in action at 7:40 a.m.”

Three hours into the attack, the 10th Brigade’s guns “picked up” the barrage. At 4:00 p.m., all batteries “moved forward” and established new positions in support of the Canadian infantry’s successful canal crossing. Throughout the day, drivers were busy transporting the required ammunition to the 10th Brigade’s gun positions, amidst retaliatory German artillery fire. One battery was particularly hard-hit: “The 35th [Howitzer] Battery suffered heavily, three Officers and seven other ranks wounded and a number of horses killed.”

Fighting continued into the following day, as the 10th Brigade “fired a barrage in support of a further attack” and immediately afterward moved forward to positions “just east of Bourlon.” During the afternoon, its guns “dispersed various parties of enemy assembling for counter-attack.” Sometime during the two days of combat—quite possibly the September 27 shelling of the 35th Battery—Douglas was struck in the face and right hand by shrapnel fragments from a German artillery shell and evacuated to a nearby field ambulance for treatment.

On September 29, Douglas was transported by ambulance train from an unspecified casualty clearing station to No. 2 Australian General Hospital, Wimereux. He had suffered “penetrating” wounds to “both orbits [facial bones surrounding the eyes] and right hand” and was “dangerously ill.” Driver Homer Douglas Stewart lingered for several days before succumbing to his wounds on October 3, 1918. He was laid to rest in Terlincthun Cemetery, Wimille, France.

By tragic coincidence, on the same day that Douglas was evacuated to hospital, his older brother, Elmore, was wounded in action near Cambrai while serving with the RCR. Once again struck by artillery shrapnel, he suffered penetrating wounds to the left scapula area of his back and a fractured left arm. Invalided to England on November 9, Elmore spent the winter of 1918-19 recovering from his injuries before returning to Canada in June 1919.

Following several months of medical treatment at Halifax, Elmore was released from military service on August 8, 1919. His discharge documents describe a “bluish, depressed scar below [the] angle of [his] left scapula 5 inches x 2 inches. Result of shell wound.” Elmore’s injuries prevented him from working and significantly affected his health for the rest of his days. He remained single, spending his final years as a patient at St. Martha’s Hospital, where he passed away on January 20, 1946. Private Elmore Harold Stewart was laid to rest in Saint James United Church Cemetery, Cloverville Road, Antigonish.