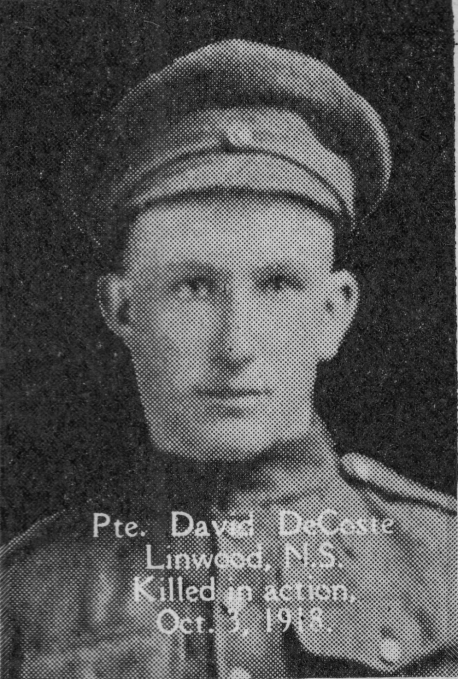 *Date of birth obtained from 1901 Census. David’s attestation papers give the date as December 4, 1896.

David Decoste was born at Little Tracadie (Linwood), Antigonish County, the son of Hubert and Mary Jane (Mattie) Decoste [Coste], Mattie’s Settlement. Hubert operated a farm close to the Intercolonial Railroad line, and David listed his occupation as a “trackman” at the time of his enlistment. Hubert was the son of Jean-Michael (De) Coste, grandson of Jean (De) Coste, and great-grandson of Jacques (De) Coste of Port Toulouse (St. Peters), Cape Breton, who settled at Havre Boucher.

David’s great-grandfather, Jean (De) Coste, was married to Anne Webb of Havre Boucher and father of four children when he drowned in St George’s’ Bay. His widow, Anne, returned with her children to her father’s home, and from that point forward this branch of the (De) Coste family was known as the “Joe Webbs.”

Mary Jane Mattie, David’s mother, was the daughter of Alexander Mathe [Mattie] and Henriette Courtin, Mattie Settlement. The Mathes are descendants of Alexander (Pioneer) Mathe, a native of the Isle of Jersey, located off the coast of France but part of the United Kingdom.

On November 2, 1917, David Decoste registered as required under the Military Service Act and before month’s end completed his medical examination at New Glasgow. The Halifax Explosion, which occurred early the following month, delayed the process of drafting and training soldiers until authorities dealt with the resulting injuries, loss of life and destruction.

As a result, David did not report to the 1st Depot Battalion until February 11, 1918, at which time he was dispatched to Camp Aldershot, near Kentville, for training. He embarked for England aboard SS Ulva on April 7 and landed at Liverpool 12 days later. David was immediately taken on strength by the 17th Reserve Battalion, the training unit for Nova Scotian infantry battalions. He spent the spring and early summer in training at Camp Bramshott. On August 21, David crossed the English Channel to France for service with the 25th Battalion (Nova Scotia Rifles) and 10 days later joined the unit in the field.

The 25th Battalion (Nova Scotia Rifles) was part of the 2nd Canadian Division’s 5th Brigade and a very experienced outfit at the time of David’s arrival. Authorized on November 7, 1914, the unit established its headquarters at the Halifax Armouries, with recruitment offices in Sydney, Amherst, New Glasgow, Truro and Yarmouth. The battalion sailed for Great Britain aboard SS Saxonia on May 20, 1915, and landed in France with the 2nd Division in mid-September 1915. The 25th’s Brigade mates were the 22th (Quebec’s “Van Doos”), 24th (Victoria Rifles of Canada, Montreal) and the 26th (New Brunswick) Battalions.

On September 27, 1918—the day the Canadian Corps crossed Canal de Nord, on the outskirts of Cambrai—the 2nd Division occupied reserve positions, behind the three attacking divisions. Before day’s end, the 25th Battalion, encamped at Hancourt, marched to Quéant, west of the canal, in a light rain. The following day, its personnel advanced to Mœuves and occupied trenches near the canal. During the day, some of its soldiers were detailed for burial parties, while 18 “other ranks” (OR) reinforcements arrived in camp.

After two days at Mœuves, the 25th marched to the northeast outskirts of Bourlon Wood at 3:30 a.m. October 1 and paused for a short rest in a field, while 4th Division units attacked German positions across the Marquion-Cambrai road. At 11:30 p.m., the 25th resumed its advance. Upon reaching trenches east of Sailly, its personnel relieved the 54th (Kootenay, BC) and the 85th (Nova Scotia Highlanders) Battalions in the front trenches, a task that was not completed until 3:30 a.m. October 2. Throughout the day, German artillery shelled their position, wounding nine OR, while another 20 reinforcements reported for duty before day’s end.

On October 3, 1918, the unit’s war diary reported scattered shelling during the day, with one OR killed and a second wounded. The day’s lone fatality was Private David Decoste of Linwood. According to his “circumstances of casualty” card, David was “on sentry duty on a railway [in the vicinity of Sailly], where his Company had taken up its position, when he was instantly killed by shrapnel from an enemy shell.” He was laid to rest in Bourlon Wood Cemetery, Bourlon, France.