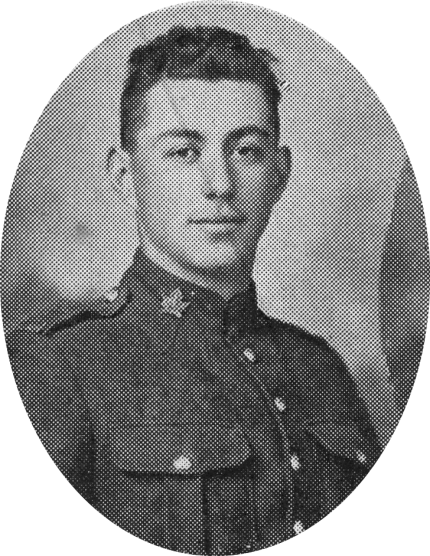 Raymond Decoste, the oldest child of Lucien and Jeanne (Fougere) Decoste, was born on March 8, 1897 at Cape Jack, Antigonish County.  Lucien and his father, Benjamin, were Acadians from the Arichat area of Cape Breton. Raymond’s sister, Marie Lillian, was born in 1899. Their mother, Jeanne,  passed away in 1901 at age 27, leaving “a disconsolate husband and two children to mourn her death.”

While Raymond remained with his father in the Cape Jack home of his paternal grandparents, Benjamin and Marguerite Decoste. Lillian was taken to live with her maternal grandparents, Fidel and Maria Fougere. Fidel, the son of Lamond and Henriette (Boucher) Fougere, was a member of an Acadian family that moved from the Arichat area to eastern Antigonish County. With aging parents and young children to care for and a farm to operate, Lucien married Florence Landry, daughter of Captain Paul and Sarah Landry. Florence gave birth to a son, Francis Harold, in 1903.

Raymond attended Cape Jack School, Section #17, and was at the top of his class for attendance during the 1905 school year. By 1913, Raymond had left school but continued to take an interest in its operation.  In March of that year, he cut and hauled a load of wood for use at the school, as his siblings, Lillian and Francis, were students there at that time.

On February 15, 1916—three weeks shy of his nineteenth birthday—Raymond attested with the 106th Battalion (Nova Scotia Rifles) at Truro, NS.  He gave his occupation as “labourer” and enlisted that day in the company of a “distant” cousin, William David Decoste. The son of David and Jessie Decoste, Linwood, David Jr. was only one month older than Raymond and was employed as a railroad trackman at the time of his enlistment. Their consecutive attestation numbers—715894 and 715895—indicate that the pair stood in line together while waiting to enlist.

The 106th recruited its personnel from across northern Nova Scotia and departed for England aboard SS Empress of Britain on July 15, 1916. Upon landing in England ten days later, the unit made its way to camp at Lower Dilgate, Shorncliffe. As with many units arriving overseas at that time, the 106th was disbanded in the autumn of 1916 and its personnel assigned to existing units in the field. Raymond was among a large group of soldiers transferred to the 26th Battalion (New Brunswick) on October 4, 1916, while David was assigned to the 87th Battalion (Canadian Grenadier Guards) on November 14, 1916.

Raymond’s new unit was authorized on November 7, 1914 and recruited its personnel across the entire province of New Brunswick. The 26th embarked for England on June 15, 1915 and was assigned to the 2nd Canadian Division’s 5th Brigade, where the 25th Battalion (Nova Scotia) was one of its Brigade mates. The 26th initially deployed in Belgium in September 1915 and served for 11 months in the Ypres Salient before following the Canadian Corps south to the Somme region of France in September 1916.

The 26th participated in the Corps’ attack on Courcelette (September 15, 1916) and suffered more than 300 casualties in the battle. Following a brief return to the Somme trenches later in the month, the unit moved northward to sectors west of Lens, where it rebuilt its ranks after its Somme service. Private Raymond DeCoste was part of a reinforcement draft that reported to the 26th’s camp at Barlin on October 15, 1916.

Throughout the winter of 1916-17, Raymond served with the 26th in the sectors west of Lens. With the arrival of spring, the Canadian Corps commenced preparations for its historic assault on Vimy Ridge, scheduled for early April 1917. On March 19, the 26th completed a six-day tour in the La Folie sector’s front trenches and retired to Brigade Support at Neuville-Saint-Vaast, located behind the 5th Canadian Brigade’s forward area. In subsequent days, its personnel provided work parties for front line repair.

On March 21, Raymond was “on a working party near Neuville-Saint-Vaast” when he “was severely wounded by enemy shell fire.”  Transported to No. 2 Canadian Field Ambulance with wounds to his left arm, thigh and face, he was “immediately evacuated to No. 30 Casualty Clearing Station where he died the following day”—March 22, 1917.

Raymond was laid to rest in Aubigny Communal Cemetery, nine miles northwest of Arras, France. News of his passing quickly reached family and community at home, prompting The Casket to comment: “The list of Acadian boys from Antigonish who have done their bit and have gone is a strikingly growing list. We believe seven is the exact number of Antigonish Acadians who have paid war’s extreme penalty.”

Raymond’s friend and cousin, David, was subsequently wounded at Vimy Ridge on April 9, 1917 and invalided to England. His right hand severely wounded by a shrapnel ball, David made a full recovery but never returned to the forward area. A third DeCoste soldier, David L.—son of Hubert and Mary Jane (Mattie) Decoste, Linwood—was killed in action on October 3, 1918. All three Decoste boys trace their ancestry to Claude Coste, who was born at Port Toulouse (St. Peter’s), Cape Breton c. 1729 and later relocated to Arichat. Claude and his wife, Marguerite, were among the first families to establish residence in Havre Boucher.