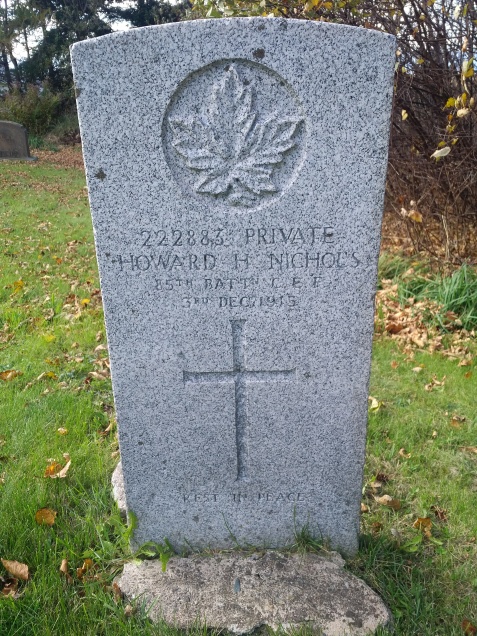 At the time of his enlistment, Howard Nichols was living near Afton, on the family farm close to the junction of old Route 4 and the road to New France.  Howard was a direct descendant of James Nichols, a native of Glasgow, Scotland, who was one of the original pioneers who settled at James River, Antigonish County about 1821. Howard’s father, James, was born at James River and came to Afton with his parents about 1868.  In 1879, he married Louisa (Lucy) Gorman, daughter of Richard Gorman of Clam Harbour, Guysborough County.  James and Lucy had four children: Margaret, William, Florence and Howard, who was the youngest.

Canada had entered World War I with Britain in August 1914, pledging its support for the Motherland.  With a regular army of only 3,110 men and a fledgling navy, Canada was ill-prepared to enter a world conflict.  Within a few weeks, more than 32,000 men gathered at Valcartier Camp near Quebec City, and within two months the First Contingent, Canadian Expeditionary Force, was on its way to England in the largest convoy ever to cross the Atlantic.  On reaching England, the Canadians endured a long and miserable winter, training in the mud and drizzle of Salisbury Plain.  In the spring of 1915, they were deemed ready for the front line and were razor-keen.  Nothing, they believed, could be worse than Salisbury.  In the years that lay ahead, they were to find out just how tragically wrong that assessment was.

Early in February 1915, the 1st Canadian Division reached France and was introduced to trench warfare by veteran British troops.  Back in Canada, thousands of young Canadians hastened to recruiting offices from Vancouver to Halifax, including Howard Nichols, who enlisted on October 30th, 1915.  Howard was only 5’2” in height and of slight build, weighing only 111 lbs at the time of his enlistment, a factor which may have contributed to his later illness.  He made the supreme sacrifice for his country after serving only a few weeks of training in Halifax, contracting measles while living in the crowded army barracks.  Shortly afterward, Howard developed bronchial pneumonia and died on December 3rd, 1915. Howard was one of a number of soldiers fatally stricken with measles during this time period.